I ran my second post pregnancy half marathon on Saturday, the Santa Barbara Veterans Day Half Marathon. It didn’t go down quite as I was hoping, but I put my best foot forward and was happy (mostly) with the outcome considering the circumstances.

This was the first half marathon I ever ran back in 2010, so I was feeling very nostalgic last week leading up to race day. The expo and bib pickup were held on Friday at the Earl Warren Showgrounds.  It took less than 5 minutes to collect my bib and race shirt, which was nice since the boys were still getting over a nasty cold and not in the best of moods.

I started to get a dull headache later that afternoon and knew I was in for it when I had zero appetite that night. I still made my traditional pre-race pasta dinner and tried my best to force what I could down. Luckily the boys went down for bed earlier than usual that night, so I was able to get all my race day gear and essentials laid out nice and early – Hoka One One Clifton 2’s, Momentum Jewelry Motivate Wrap, Osielle Roga Shorts and Verra Bra, and Shower Pill (for staying nice and fresh for the post race festivities). 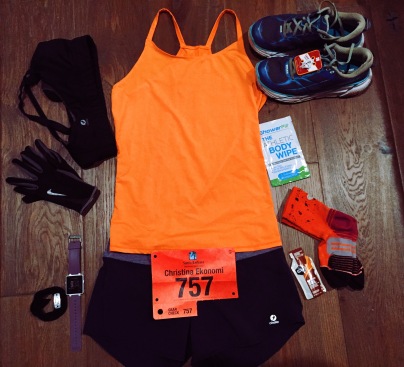 I was in bed by 9:00 p.m. Usually I’m restless and antsy the night before a race, but not this time. I set my alarm for 5:00 a.m. and fell asleep almost as soon as I closed my eyes.

When I woke up in the morning the headache was worse and my energy was gone, but I was really looking forward to returning to this race, so maybe against my better judgement, I decided to toe the line and suffer whatever consequences might come as a result.

My MIL lives right next door, so she came over to watch the boys while K dropped me off at the start. He dropped me off in a parking garage as directed. Weirdest drop off point for a race, but it was easy enough to follow the crowd and find the start line.

This was a point to point course starting at UCSB. It was pretty darn cold considering the high temps we’ve been having all fall in Southern California, but I decided to forgo dealing with bag check and left my jacket at home.

I squeezed in close to the 1:50 pacer since this was my original goal finish time and I was still hoping I’d be semi close to this despite feeling under the weather. 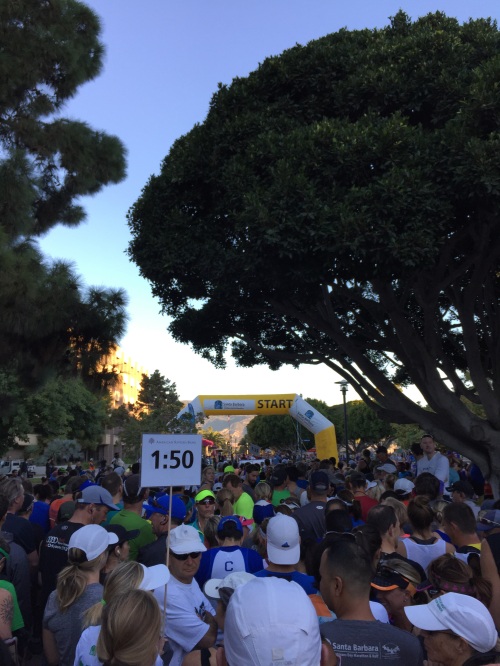 I was in wave 2 which took off at 7:02 a.m. The first three miles were fantastic and felt like I was flying.

Things took a quick turn for the worse when I reached the first water station just past the mile three marker. I had to stop and walk through it, something I rarely do, especially this early on. It felt hard to breath and I had major phlegm build up in my chest, but I pushed on.

I maintained a decent pace until the next fluid electrolyte station at mile 5. I stopped again to fuel up and took a gel. Within a few minutes I felt a surge of energy which carried me all the way to the dreaded Cliff Dr. hill at mile 10. It took every last ounce of energy to make that .5 mile climb and my only saving grace was knowing it was all downhill once I reached the top. I think I had to stop to walk three times up that hill. Ouch. More stopping than I have ever done in a race before.

The 2 mile downhill to the finish was even a struggle. It was lined with flags in honor of Veterans Day which was a pretty awesome sight and gave me chills! I stopped one more time less than a mile from the finish line and watched the 2:00 pacer fly past me which was the spark I needed to dig deep and finish strong. I thought about all the soldiers in the world and the far worse pain many of them have to endure.

I managed to re-pass the pacer and was totally spent after crossing the finish line. It took me a good 5-10 minutes to collect myself to find K and the boys. 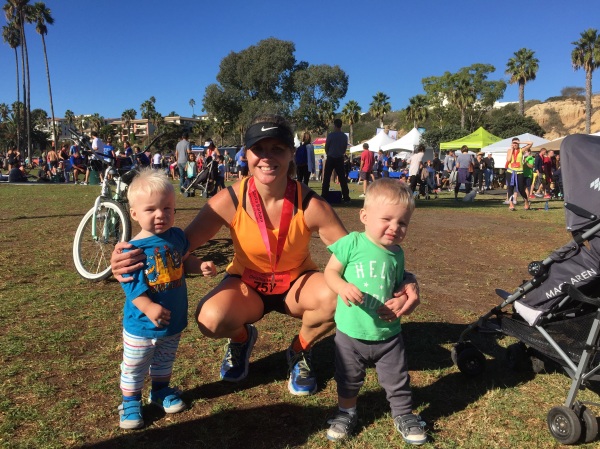 In the end, as bad as I felt after the race, I’m so happy I did it. I beat my last half marathon time by 3 seconds (hey I’ll take it) and my old time on this course by 7 minutes exactly.

I wouldn’t recommend running a half marathon while sick to anyone, but this is one I didn’t want to miss. It’s such a fun community event. Unfortunately, I wasn’t able to partake in the post race festivities after which included a free beer and food trucks, but it looked amazing. Next year! 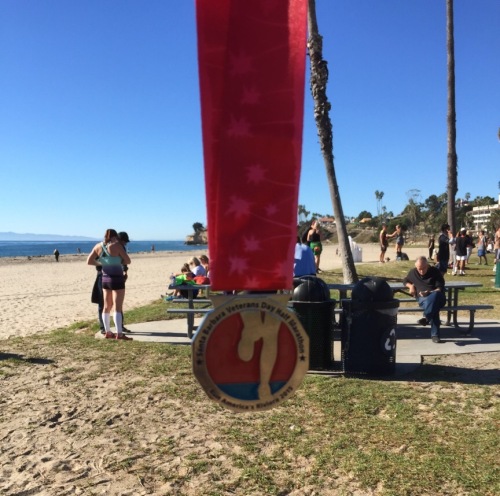 Next I have my sights set on a shiny new PR at my A race, the USA Half Marathon in two weeks.

There was an error retrieving images from Instagram. An attempt will be remade in a few minutes.