This weekend I ran my first international race in the city of Sabadell, Spain just north of Barcelona.  I had no specific goal for this race other than being present and enjoying the experience.

The race featured three distances: a mitja marato (half marathon) 14k and 7k. There were over 2,000 participants total between the three distances. I chose the 14k because it’s a race distance I had never run before and K (who was watching the boys) had a business meeting to get to after, so unless I planned to run a blistering fast half, he wouldn’t make it on time. More on my amazingly supportive husband without whom my racing would not be possible in a future post.

The race started at 9:00am and was about a 20 minute cab ride from our hotel in Barcelona. I set the alarm for 7:30am figuring that would give me enough time to get ready without disturbing the twins too much. After this race I have come to accept that 30 minutes to get ready with 2 toddlers is not going to cut it anymore. After feeding, changing and dressing them we were in the cab and on our way at 8:15am.

I grabbed a piece of pretzel bread from the hotel breakfast buffet on our way out and ate it during the cab ride to the race. My go to pre-race meal is always a banana and peanut butter, but the hotel did not have any (maybe these are not so popular in Spain). I knew I had to eat something or run the risk of hitting a wall since I had also neglected to pack my energy gels and chews.

Our cab driver didn’t seem to know the area of Sabadell were the race start was located. He dropped us off on a corner where the road was blocked and a police officer was directing traffic. We saw runners with bibs so figured we were close enough to the start location.  It turned out to be a 2 mile walk to the start line.

It was only 5 minutes to race start when we arrived and I still had to get my race bib from registration. There was a long line of people waiting to get their bibs so I thought I would for sure be late to start. The organizers started yelling something out in Spanish. I wish the two years of Spanish I took in high school had stuck, but sadly I didn’t understand a word. I saw them handing out race numbers and jotting down names on a piece of paper, so quickly collected one (#3541), gave all my boys a kiss and ran to the start line. 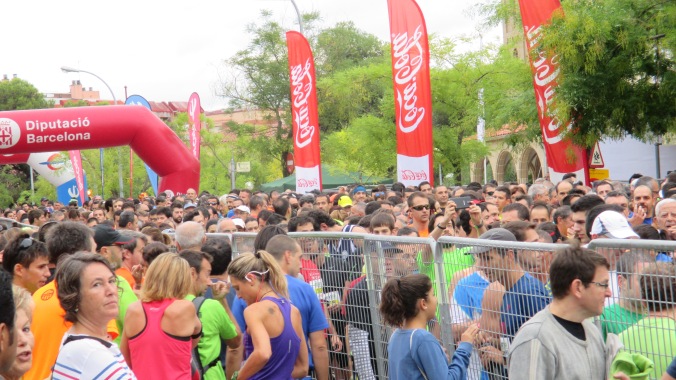 I was in the back of the pack which normally I hate, but didn’t mind because I was not in my typical racing mode.  I decided to run this one without headphones on (a rare thing for me if they are allowed on the course) and focused on being totally in the moment. 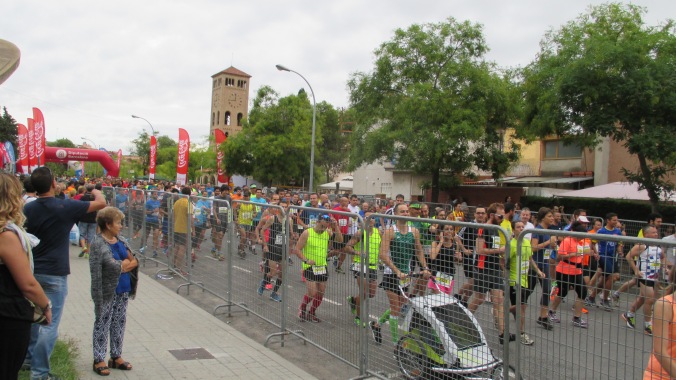 The 14k route consisted of 2 loops. The first loop was really crowded and by mile 3 the streets got very narrow which made passing pretty difficult, but I managed to pass a lot. I wasn’t running for a specific goal time, but it was still a race and I love passing people!

By loop two the crowd had totally thinned out. I think about 1,500 of the 2,000 runners did only the first loop (the 7k race). The second loop around was mentally challenging. The energy of the previous crowd of runners was gone and I had already seen the sights during loop one so there was nothing new and unexpected to see.

I was losing my mojo fast, posting positive splits and desperately wished I had a gel or music to pump me up. I managed to power through to the end with the help of some much needed cheers and encouragements from local spectators and finished with a time of 1:19:11.

I placed 13 out of 47 total women who ran the 14k which I was happy with. For some reason unknown to me I did not appear in the official results posted on the race website. I suspect it had something to do with my name not being recorded with the mass handout of bibs prior to the race.

After crossing the finish line and collecting the bag they were handing out, I was so happy to find K and the boys right away. There was no time to hang out for the post-race festivities. K took a couple quick photos, then we trekked a bit to find a cab and back to Barcelona we went. 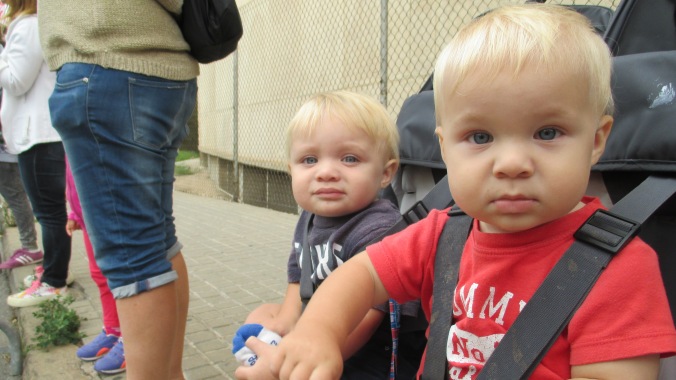 The rest of the day was spent being tourists around Barcelona and a lovely bike tour on the beach. Keep your eye out for a post about the trip and traveling with babies.

This race was a great experience and I can’t wait to add more international races to my bucket list soon. I have my eye on the Stockholm Half Marathon or Copenhagen Half Marathon for my 2016 schedule since we plan on traveling to Denmark and Sweden this time next year.

Up next though are two half marathons much closer to home, Santa Barbara Marathon & Half on November 7th and US Half Marathon San Diego Invitational two weeks later.